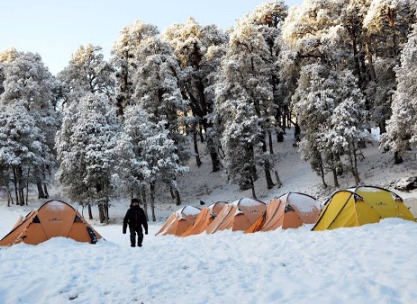 Auli has one of the longest skiing slopes in Asia. One of the best ski slopes in terms of safety, and known to be a skier's paradise. The 3kms long slope ranges from 2519 m to 3049 m offering a glorious view of the towering Himalayan peaks such as the Nanda Devi (7817m), Kamet (7756m), the Mana Parvat (7273m) and the Dunagiri (7066m). One could reach Auli from Joshimath (1890m) by taking a leisurely 3 km ride on the (cable car). In summer Auli is a relaxing destination, with the massive Alaknanda gorge flanking its North, and the almost unending grassy slopes all around, making it the most relaxing hill resort in the Indian Himalayas! A large number of visitors visit this delightful destination in both summers and winters.

Lord Curzon went up to the Kwari-pass in 1905 and hence the trek is named after him as "Corzon Trail". The trek over the Kuari Pass was the route followed by Shipton and Tilman on their way to the Rishi Gorge and by other mountaineers en route to the peaks on the Indo-Tibetan border. It is also called the Curzon Trail, as the famous former Viceroy of India also travelled this route. The trail was named after Lord Curzon who was a keen trekker and it is said that the path was specially improved so that he could do the trek. Lord Kurzon made the trek to Kuari pass, and since then it has come to be known as Curzon's trail. It is very popular among European and American Travelers. In 1905 Lord Curzon reached Kuari pass from Ghat via Ramni. Today many trekkers prefer to undertake the trek in the reverse direction. The main attraction of Curzon's trails is the majestic view of the twin peaks of Nanda Devi, Kamet, Dronagiri and Hathi- Ghodi Parvat. You get truly spectacular views of the Himalayas - Trishul 23,496 foot 7,120 meter, Kedarnath 22,994 foot 6,968 meter, Kamet's pyramid of granite 25,595 foot,7,756 meter, Nilkanth 21,767 foot 6,596 meter, the square-topped summits of Gori Parbat and Hathi Parbat, Badrinath, the icy crest of Dunagiri, Rishikot, Changabang 22,651 foot 6,864 meter, Kedarnath and Chowkhamba 23,522 foot 7,128 meter and the legendary twin peaks of Nanda Devi, 25,643 foot 7,740 meter, surrounded by an awesome 19,800-foot 6,000 meter wall which forms a sanctuary.

Q1. From where does the Kuari pass trek starts?

Q2. Where and at how much altitude is the Kuari pass trek situated?

Ans. This wonderful trek is situated at an altitude of 4264 meters and on the western side of “Nanda Devi Sanctuary”.

Q3. How many days are require to complete the Kuari Pass Trek?

Ans. For completing this wonderful trek 6 days are require.

Q4. What is the best time to do Kuari pass trekking?

Ans. The best time to do Kauri pass trekking begins from November to March because winter makes it more wonderful.

Q5. How much trekking distance is there in kuari pass trek?

Ans. 21.5 km approx distance is there in kauri pass trekking.

Q6. What is the best thing about Kuari Trekking?

Ans. It gives the wonderful view of Himalayas cover with snow in winter and is best for beginners.

Q7. What the main things to be kept in mind during trekking?

Ans. During trekking there should be proper arrangement of material require in trekking and the trekkers should listen to their guide.

Q8. In kuari trek horses are available or not?

Ans. No there are no horses available for trekking.

Q9. Which type of food is offer for eating in Kuari Trek?

Ans. Normal foods are offer for eating like bread, jam etc. which do not cause any problem during trekking.

Q 10. What is the best timing to visit Auli Kuari pass trek?

Day 2 Joshimath to Chitrakhana
To begin the Kuari Pass trek we drive to Dhak village. At this village we will begin our trekking trip to the Kuari Pass. We trail through a hemlock, oak and rhododendron jungle for 3km before a short descent to the meadow and campsite at Chitra Kantha (3310m). The notable snow-capped ridge, including Chaukhamba 1 (7138m), can be seen beyond Joshimath. The shepherds living between here and the Kuari Pass are from Rishikesh or Haridwar and graze flocks of sheep and goats throughout summer. There is a small spring line at the head of the meadow for replenishing your water supply.

Day 3 Chitrakhana to Khulara Bugyal via Tali Top
We will begin our day early with a few stretching exercises in the morning followed by breakfast. After this our trek leader will brief us about today's trek schedule. Today we will trek for around 6 kms to Khulara Bugyal via Tali Top through green vegetation and red rhododendron flowers which turn red during the blooming season in April and May. Climb up through the forested ridge of Rhododendron, Spruce and Silver Birch above Chitra Kantha. It takes around an hour to reach a prominent ridge top (3500m) and a further 30 minutes around to an open meadow where it meets the well-defined track from a place called Tapovan. We will camp at the alpine meadow Khulara Bugyal at the end of Tali top.

Day 4 Khulara Bugyal to Kuari Pass and back
We will begin early as this is the longest day on the Kuari Pass Trek. First leg of today's trek is a gradual ascend till Khullar top and from there traversing through the snow patch we reach Kuari Top. At Kuari Pass top winds will gush past you. Savour the unending vistas of great Himalayan peaks including the famous Nanda Devi. Nanda Devi (7816m) is the highest peak completely within India. It is surrounded by a huge circle of mountain walls with only one outlet, where the Rishi Ganga forges a route through deep, almost impenetrable gorges before flowing into the Alaknanda River. Given these natural defences, it was not until 1934 that the first mountaineers were finally able to reach the base of Nanda Devi. Return to Tali Top through the same route and enjoy camp bonfire and sumptuous dinner at Tali campsite.

Day 5 Tali to Joshimath via Auli
After having breakfast we trek downhill beside the Rishi Ganga River till the road where the taxi will take us to Joshimath. On the way we will pass Auli which is famous for its skiing slopes and is home to winter skiing resort run by GMVN(Garhwal Mandal Vikas Nigam). The Auli resort run by GMVN has snow beaters which beat the snow to keep the slopes fit for skiing at all times. GMVN also conducts 7 and 14 day skiing courses at Auli.

Day 6 Joshimath to Haridwar
Today we start driving early to reach Haridwar with a beautiful mosaic of memories to keep us company. If we reach Haridwar on time then you can take part in Ganga Aarti at Har ki Pauri. Trek ends.