Rishikesh is one of the most holy cities in India. It is to be found in the Dehradun district of Uttarakhand. Rishikesh Tourism sightseeing includes visiting famous the places in and around Rishikesh.

Holy city of Rishikesh in Uttarakhand is home to various tourist attractions. A place where divinity and nature combine and give the choicest of experiences, it seeks to be a perfect abode for people seeking piety, tranquility and wisdom. Rishikesh is the ideal base camp for exploring the majesty of the mountains and conquering the torrents of the river. Spiritual pursuits and adventurous tourism quests form an important part of its traveler influx. Listed below are some places to be included in sightseeing tours of Rishikesh.

There is no dearth of things to do and places to see in Rishikesh. One can opt for an action packed holiday or select to do nothing. Rishikesh is a magnificent place for those who want to learn yoga. Adventure seekers love it for the rafting and trekking breaks that the destination offers.

Following are the Tourist Attractions of Rishikesh 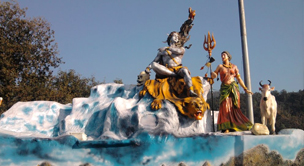 Triveni Ghat : o be found in the heart of town, is the most famous bathing ghat, where most pilgrims take a holy dip earlier than they visit the various temples. This is done generally in the early mornings, with the pilgrims offering prayers and milk at the Ghat and feeding the fish in the water. An amazing sight here is the evening arati, a ceremony accompanied by lights, drums and chanting, with the entire ghat lit with lamps glowing from a distance. 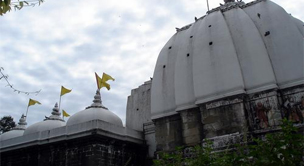 Bharat Mandir : Near the Ghat, is the temple known as Bharat Mandir said to be the oldest temple here built by the Adi Shankaracharya. This 9th century temple has the deity of Lord Vishnu carved out of a single black stone popular as Shaligram, and is placed in the inner chambers of the temple. The original temple was said to have been destroyed in 1398 AD. If you are lucky, catch the spring festival also called Basant Panchami celebrated here. 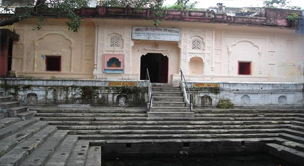 Rishikund : Close to the Triveni Ghat is the very old place of Rishikund where the Saint Kubz is said to have been blessed by the Goddess Yamuna, who filled the pond with her water. The temple of Raghunath dedicated to Lord Rama and his wife Sita is sited here. 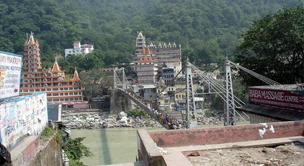 Lakshman Jhula : 2 kilometers from Swarg Ashram, is the well-known Lakshman Jhula a suspension bridge 450 feet long and built in 1939. Named after Lord Ram's younger brother Lakshman, it has temples dotting its either side, including the famed Lakshman Temple at Tapovan. One more noteworthy ashram is the 13 storeyed Kailashananda Ashram, with each storey being dedicated to a different deity. 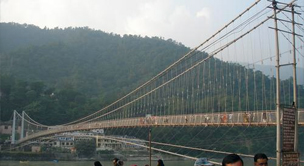 Ram Jhula : Ramjhula is situated 3Km north of Rishikesh. It's a very popular place amongst people coming for religious purposes because it has very known Ashrams. Most known is Geeta Bhavan & Swarg Ashram and these temples are very important in Hindu society and you will see much more commotion here then in Lakshmanjhula. 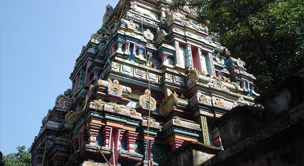 Neelkanth Mahadev Temple : To be found at a distance of 12 km from Rishikesh, this temple stands at a height of 926m on top of a hill across the river Ganga. It derives its name from Lord Shiva. According to mythological belief; the cosmic churning of the oceans (Sagar Manthan) for the potion of immortality (amrit) by the Gods and the Demons; produced a venomous liquid, which was consumed by Lord Shiva at this place. As a result, his throat became blue in color, which in Hindi literally means 'Neelkanth' (blue throat). The place is a favorite among the religious tourists. 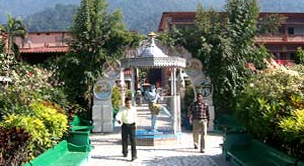 Swarga Ashram : There is a cluster of ashrams on the eastern bank of the Ganges, and the place is popularly known as 'Swarga Ashram'. Most of these ashrams provide courses on yoga and spiritual studies, and are well-known among the tourists. Some ancient temples with beautifully carved statues are also located in the place. There are a few vegetarian food joints that serve various Ayurvedic food and refreshments. A few shops are also found, that sell various trinkets and souvenirs in the form of religious tapes, books, beads, beaded garlands, shells and clothe. 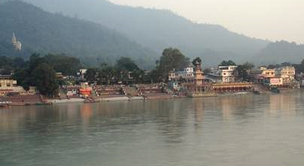 Gita Bhawan : Near the Lakshaman Jhula, is the newly constructed building of Gita Bhavan. It runs a free Ayurvedic dispensary and also has a branch of the Gita Press, Gorakhpur. There are more than a hundred rooms for visitors and this edifice houses various striking paintings and statues of ancient mythological characters. The stories of the ancient epics- the Ramayana and the Mahabharata are beautifully illustrated on its walls. The place is also popular among the tourists.